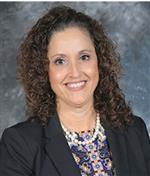 An award-winning educator with 26 years of experience, Smith has served as principal of Forts Pond Elementary School in Pelion for 11 years.

Smith began her educational career in 1995 as an instructional assistant at Pelion Elementary School. The following year, she moved to Busbee Middle School in Lexington School District Two to teach math. In 2002, Smith returned to Lexington District One to teach eighth grade science at Pelion Middle School. Smith also taught English language arts and social studies while at PMS.

In 2006, Smith was promoted to administrative assistant at PMS; in 2008 she joined the team at FPES to serve as the school’s assistant principal. In 2011, Smith became the principal of FPES.

Under her leadership, FPES was designated as a Red Carpet School by the S.C. State Department of Education in 2010. The school was also named a Title I Reward School for Performance in 2012 and 2013, as well as a Leader in Me Lighthouse School in 2016. In addition, FPES received three 21st Century Community Learning Center grants during her tenure as principal.